Bukoba Municipality has a total area of 80 square kilometres whereby 22 sq.km of that area are covered by water and the remaining 58 sq.km is land. The town lies at an altitude of 1150m above sea level. Much of the town structures are at the basin surrounded by escarpments invariably decorated by coffee/banana plantations, trees, and rocks.
Historical development
Bukoba emerged as the trading and commercial centre before becoming the administrative  headquarters of Buhaya Council which comprised of 8 divisions  namely Bukoba itself, Kyamtwara, Bugabo(Maliyamkono), Kihanja, Kiziba, Missenyi, Ihangiro and Karagwe.
Bukoba Town is among the oldest towns in the country. Its administive Authority as Township was conferred upon it by the then British Colonial Government under the Local Governance Ordinance Cap 333 on the 27th June 1960. At that time Bukoba was small town comprising of what is now called Uzunguni in Miembeni ward, the Central business District (CBD) and two residential neighbourhoods neighbouring the CBD called “Uswahilini” and Nyakanyasi. These residential neighbourhoods form parts of wards now called Bilele and Bakoba.
By the turn of independence in December 1961 Bukoba town was a glamorous, well planned town surrounded by homesteads under banana and coffee trees at its outskirts. Thereafter the town expanded its administrative boundaries to meet the increasing population. The situation has resulted to environmental degradation, growth of slums and deterioration of infrastructures.
As for 2005 Bukoba town council acquired the Municipal status and is among the eight town councils in the country which were promoted to Municipal council and  announced in the Government Gazette No. 210 of 29th July, 2005. 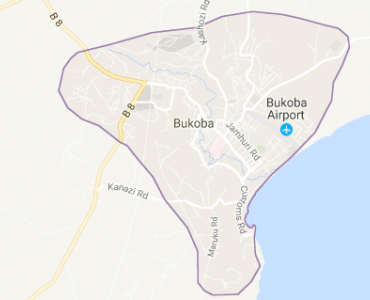